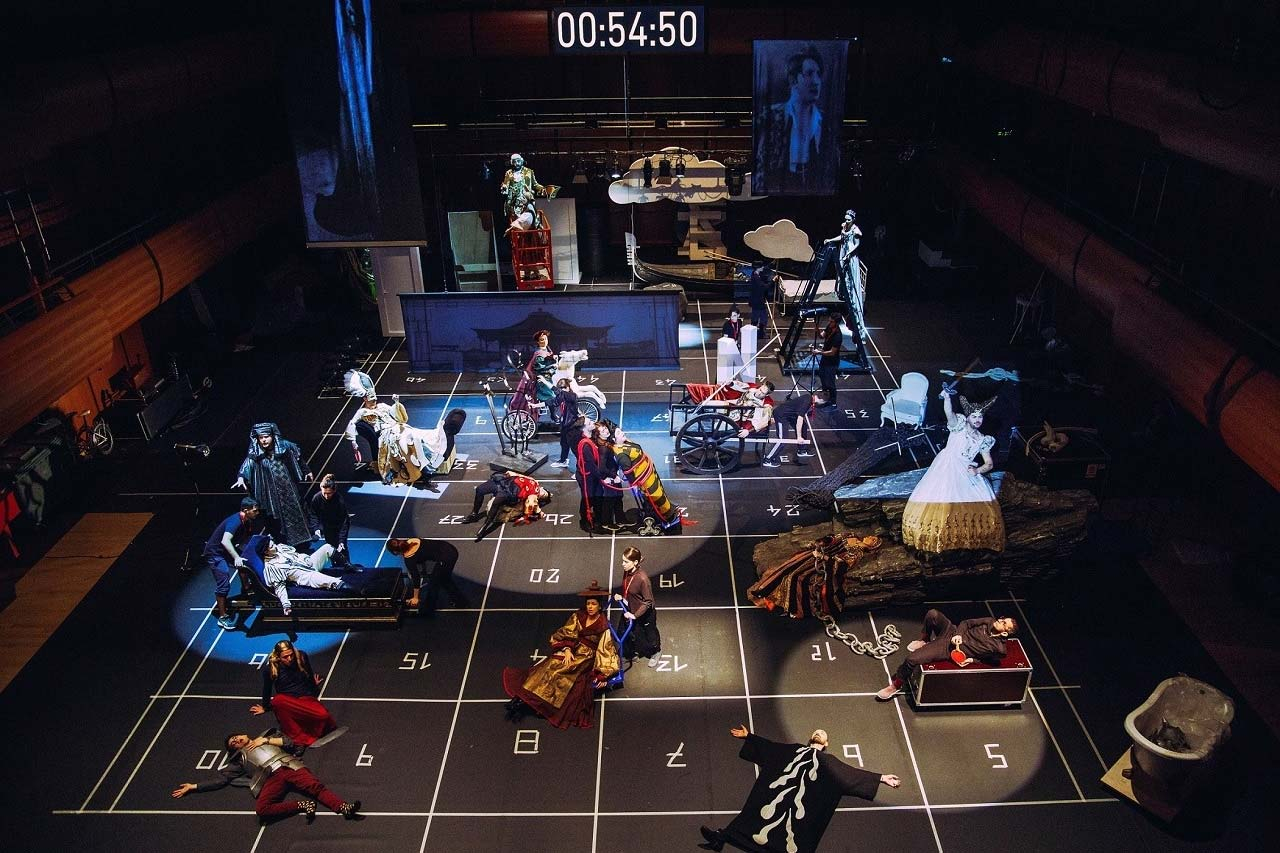 VISUAL CURATING: SPACE, SETS, PROPS AND THE ARCHIVE OF THE HISTORICAL COSTUMES OF GNO
Petros Touloudis

With the participation of the Athens Youth Symphony Orchestra (ASON)

For the purposes of the performance the Alternative Stage’s stall seats have been removed, and viewers will only be able to watch the show from the balconies. The philosophy of the performance allows the alternation and free movement of viewers throughout its duration. The maximum number of viewers cannot be over 250. Admission is free upon priority vouchers which will be distributed at the GNO box office an hour before the beginning of the performance, as well as during it, should there still be any available seats left.

On the occasion of the Greek National Opera’s 80th anniversary, on 5 March 2020, the Alternative Stage presents the emblematic meta-opera of the Pope of avant-garde John Cage Europeras 1&2 for the first time in Greece.

It is a stormy memory game, a kaleidoscopic operatic collage of 105 arias, 5 duets, 1942 musical excerpts from 64 operas, 14 singers, 10 stage assistants, 24 musicians, 127 costumes, 72 archival images, 121 props, 101 excerpts from recordings, 112 scenes. The performance is 135 minutes long. Europeras 1&2, bearing the stamp of director and choreographer Zoe Hadjiantoniou and visual artist Petros Touloudis, will be presented on the GNO Alternative Stage at the Stavros Niarchos Foundation Cultural Center for three performances, on 5, 6 and 7 March 2020.

The performance is realized thanks to the support of the Stavros Niarchos Foundation’s grant to the Alternative Stage.

“For two hundred years Europeans sent us their operas. Now I send them back to them.“ - John Cage

Written between 1985 and 1987 and commissioned by the Frankfurt Opera with the suggestion that it would overturn the tradition of opera as a genre, the work is a laudatory as well as vitriolic take on the 18th-and-19th-century operatic repertory. In this performance of the GNO Alternative Stage the materials fragmentarily and randomly used by the composer have been retrieved from the historical repository of the Greek National Opera’ s 80-year-long operation: historical costumes, stage props, faces, sounds, videos and a rich archival photographic material feature for the first time in a composer’s operatic work.

Especially for the purposes of Europeras 1 & 2 stall seats have been removed from the Alternative Stage, so that the entire ground space can be used as stage. Viewers will have the possibility to watch the performance from the two balconies of the Alternative Stage. Throughout the performance, the audience will be able to move freely on the balconies surrounding the stage and watch the action from different angles, enjoying a rare operatic experience. Each one will watch their own version of Europeras 1&2 or Your operas, as John Cage named his opera.

Music coaching of the Athens Youth Symphony Orchestra (ASON) and the “Youth Opera” by conductor Michalis Papapetrou; selection of historical photographs and recordings from the GNO archive by Yannis Svolos; video mapping by Pantelis Makkas; software development and electroacoustic design by Giorgos Mizithras; and lighting design by Eliza Alexandropoulou.

Europeras 1 & 2 derives its name from the words "Europe" and "opera," suggesting the work's content and sounding like "Your opera," alluding to the work's populist leanings. The "1 & 2" of its title denotes two, unequal parts -- one 90 minutes in length, one 45. Europeras 1 & 2 is, like all of Cage's work since the early 1950s, conceived wholly of chance operations. The chance operations employed, however, are of unprecedented sophistication even for Cage, due to the use of high-speed computer technology to run "IC," a stand-alone computer (software) program specially designed by Andrew Culver to simulate the coin oracle of the I Ching.

The work's musical "content" is the simultaneous presentation of arias and duets heard against and within a pulverized, decontextualized mass of 1-16 measure instrumental fragments drawn from 64 European operas of the past, all in public domain and ranging from Gluck to Puccini. Its cast of players is, by opera standards, somewhat small: 14 singers, 10 dancer/athletes, and a 24-piece orchestra, without the usual body of strings and with the unusual addition to its percussion section of "truckera," 18 pre-recorded tracks of 101 layered fragments of European operas. In this version one more element is added the “victrola gno” a mobile speaker that reproduces a selection of arias drawn from old archive recordings of GNO repertory. Its extra-musical elements (all selected through chance operation procedures) are those commonly associated with the genre: elaborate lighting cues, costumes, and props, lively and varied stage actions, intermittent dance, and an imaginative, subtly shifting stage décor.

She lives and works as a choreographer and director in Athens. She studied at the Department of Theatre Studies (National and Kapodistrian University of Athens), at the National School of Dance and at the Dance Space Centre, New York. As a choreographer – movement director she has collaborated with numerous theatrical groups, directors and theatrical organizations in Greece and abroad. During 2005/07 she cooperated as a dramaturgist and choreographer at the European project I – MAP, which was presented through the interactive multimedia performances See you in Walhalla and Fwd: See you in Walhalla. Her choreographic work has been presented at Joyce Soho, Arts Evolving Theater, Cultural Center of Macao and Southbank Center. She has directed performances such as Wunschkonzert (Franz Xaver Kroetz), Scenes (Efthymis Filippou), The Arrival (multimedia performance), The Blinds (Maurice Maeterlinck), The First Ladies (Werner Schwab), Hedda Gabler (Henrik Ibsen), as well as the operas Frosyni (Paolo Carrer) and The Fugitives of the Chessboard (George Kouroupos).

Petros Touloudis Visual conception, sets, props and costumes from the historical archive of the GNO

He lives in Athens. He graduated from the Athens School of Fine Arts. He works in the areas of visual art (sculpture, video, installation, performance), opera and theatre. Among others, he designed the sets and co-designed the costumes of the opera The Murderess by Giorgos Koumendakis (Greek National Opera, 2014 & 2016), the set design of the The Princess and the Pea by Ernst Toch (GNO, 2018), and the set and costume designs for the work Τhe Day Will Come… by Giorgos Koumendakis (GNO Alternative Stage, 2017). Between 2015/17 he was a fellow at the Akademie Schloss Solitude in Stuttgart, Germany. Since 2015, he is co-founder of Tinos Quarry Platform, a forum for contemporary art, operating as an artist-in-residence programme, located in the island Tinos of northern Cyclades in Greece.

Conductor and pianist, born in Athens. He studied piano and advanced music theory at the Hellenic Conservatory and musicology at the Department of Music Studies of the National and Kapodistrian University of Athens. He continued his studies at the University of Music and Performing Arts in Munich (Bruno Weil’s and Klaus von Wildeman’s class). He has conducted orchestras such as Munich Symphony Orchestra, Bad Reichenhall Philharmonic Orchestra, Ingolstadt Strings Orchestra, Heilbronn Strings Orchestra, National Symphony Orchestra of the Hellenic Broadcasting Corporation, Orchestra of Colours, Greek National Opera Orchestra, etc. He was distinguished among two hundred and seventeen participants at the Dimitris Mitropoulos International Competition for orchestra conducting as he qualified at the top eight of the competition. He has collaborated with the European Opera Centre, Greek National Opera, Athens Festival, Athens Concert Hall, Thessaloniki Concert Hall, Armonia Atenea, etc.

He studied photography and video and graduated from the School of Fine Arts in Athens and Prague, as well as from the Gerrit Rietveld Academy in Netherlands. In 2005/07 he received a scholarship from the De Ateliers Institute in Amsterdam for his postgraduate studies. There followed his first personal exhibition at the Museum of Contemporary Art. During 2009/15 in cooperation with the Leiden University and PhDarts he completed his artistic research. He has presented video art and video design in Greece and abroad. Moreover, the last years, besides his personal work, he has worked with theatrical directors such as Yannis Houvardas, Vangelis Theodoropoulos, Elli Papakonstantinou, Zoe Chatziantoniou, etc, curating the videos in performances which have been presented at the National Theatre, Athens, Stavros Niarchos Foundation Cultural Center, Greek National Opera, Neos Kosmos Theatre, Art Theatre, etc and in festivals such as the Athens Festival, Nostos Festival, BE Festival (UK), Operadagen Festival (NL), etc.

Born in Athens, he studied architecture at the Technical University of Athens and in the USA. He worked for the Greek Ministry of Culture at the restoration project of Epidaurus (1984/92), at the Foundation of the Hellenic World (1995-2000), in the production of a documentary about the Ancient Olympics Games (2000) and participated in a NSRF project about the castle of Mytilene (2007/13). He collaborates with archaeologists and graphic designers on the creation of 3D representations of Greek archaeological sites. He is a music critic of Eleftherotypia (1996-2012) and Editors’ Newspaper (Efimerida ton Syntakton, 2012/20). He has collaborated with the Third Programme of the Hellenic Broadcasting Corporation (1994-2014), music institutions (Athens Concert Hall, Thessaloniki Concert Hall, Athens Festival) and in Greek composers’ discography (Cultural Olympiad 2001/04). He teaches in seminars for opera scenography (2001/19). He wrote the libretti for the operas The Murderess by Giorgos Koumendakis (2014) and The Wax Doll by Tasos Rosopoulos, 2019). He participated in a NSRF project about the Greek National Opera historic archive (2013/15) and in television productions about the history of the opera in Greece (2016/18, Cosmote / History Channel).

She graduated from the School of Drama of the Faculty of Fine Arts at the Aristotle University of Thessaloniki. She was awarded the first Unesco Prize for the Promotion of the Arts, for her stage design work on the subject titled Babel, at the Prague Quadrennial of Performance Design and Space in 2007, and a prize for innovative lighting design for Euripides Laskaridis’ Relic performance at the 2017 Theatre and Technology Awards organized by Theatrefullstop in London. She lives and works in Athens as a lighting designer in theatrical and dance performances. She has collaborated with Thomas Moschopoulos, Xenia Kalogeropoulou, George Kimoulis, Thodoris Gonis, Euripides Laskaridis, Argyro Chioti, Maria Panourgia, Anestis Azas, Prodromos Tsinikoris, Group Plefsis, Zoe Chatziantoniou, Charis Fragoulis, Christos Passalis, etc. She is a member of the creative lighting group Beforelight. Since 2007, she has been evolved in lighting design installations and urban events in Greece and abroad.

Youth Opera is an educational programme of the Greek National Opera targeted at young artists who have completed their studies and are now making their first professional steps. The main goal of the programme is to offer them the possibility to develop and present their skills in a work environment that is protected and supervised by professionals acclaimed in their fields. Participating artists are tested in a real work environment and take part in opera productions and concerts. Mentoring and training of the new artists are assumed by renowned opera artists and not only, such as: Angelo Simos, Michalis Papapetrou, Martha Tomboulidou, George Kouvaras and Stratos Papanoussis. Masterclasses are or will be given by Barbara Frittoli and Tassis Christoyannis. The participation in the programme is cost-free and the main goal is to create well-trained opera professionals. Head of the Youth Opera programme is Angelo Simos.