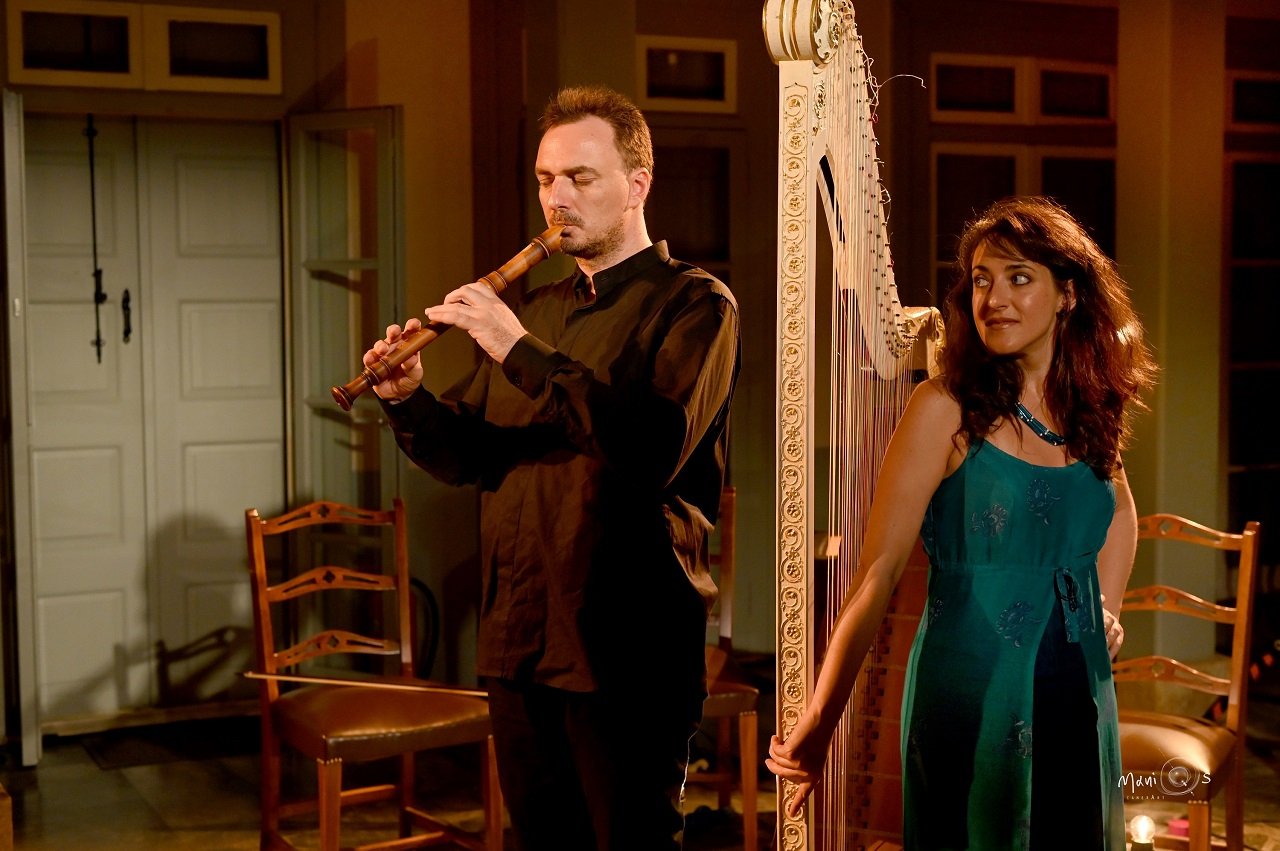 Rigas’ Flute: From absolutism to the Revolution

The Alternative Stage of the Greek National Opera presents a special concert dedicated to an unknown side of Rigas Feraios,  his talent as a flute player. The concert Riga’s Flute: From Absolutism to the Revolution featuring Dimitirs Kountouras and Flora Papadopoulou, two distinguished early music soloists, will be presented on the GNO Alternative Stage at the Stavros Niarchos Foundation Cultural Center on Thursday 9 December 2021 at 20:30, as part of the tribute to the 1821 bicentennial of the Greek Revolution.

The life and work of Rigas Feraios, poet of the revolutionary anthem Thourios, martyr of the Greek national cause and precursor of the Greek War of Independence, are widely known. Less well known, however, is his interest in music. The programme of this tribute concert by Dimitris Kountouras and Flora Papadopoulou includes compositions from the rich chamber music repertoire of the transitional period between the absolutist Ancien Régime and the paradigm shift brought on by the French Revolution.

The concert programme comprises works for flute and harpsichord by Italian, French, Austrian and Greek composers, including variations on the revolutionary songs La Marseillaise and La Carmagnole by Giuseppe Cambini, arias published in the aftermath of the Revolution in the journal Chronique de Paris and compositions written in Vienna during the time of Rigas’ revolutionary activity by composers such as Carl Ditters von Dittersdorf and Michael Haydn.

He specialises in early music and historical flutes. He studied the recorder and historical flutes at the Utrecht School of the Arts, the Music Academy of Milan and the Vienna Conservatoire. He obtained the degree of Master of Early Music from the Trossingen School of Music and a PhD in historical musicology from the National and Kapodistrian University of Athens. He was a post-doctoral scholar at the Research Centre for the Humanities, Athens, for the project “Music and poetry of the troubadours in the Latin Kingdom of Thessaloniki after 1204” (published by Nefeli, 2017). He is the founder and artistic director of the Ex Silentio early music ensemble, which has appeared in various international festivals and released several records. He has collaborated with Armonia Atenea, the Harmony of Nations Baroque Orchestra and the Vienna Symphony Orchestra under Philippe Jordan. He has appeared at the Sala Verdi, Milan, the Pablo Casals Hall, Tokyo, the Vienna Konzerthaus, the Felicja Blumental International Music Festival, Tel Aviv, the Bach Festival Riga, the Banchetto Musicale Early Music Festival, Vilnius, the Via Mediæval festival, Mainz, the Mousiké festival, Bari, the Athens and Thessaloniki Megaron, the GNO, the Athens Festival etc.

He participated in the Armonia Atenea European tour of the award-winning production of the opera Alessandro by Georg Friedrich Händel and has appeared with them in concerts at Bozar Brussels, the London Proms, Versailles, Moscow and other European cities. He has taken part in recordings for the Talanton and Carpe Diem labels with the Ex Silentio ensemble and in opera recordings for MDG and Decca.

He teaches at the Athens Conservatoire and the Ionian University.

She is a Greek-born harpist based in Milan, Italy. After completing her modern harp studies, she dedicated herself to mastering early harps with Mara Galassi at the Scuola Civica of Milan. She has obtained a Bachelor’s degree from the University of Parma and a Master’s degree in Musicology from Sorbonne University, Paris. She has worked with conductors such as Christina Pluhar (L’Arpeggiata), Rinaldo Alessandrini (Concerto Italiano), Jean-Christophe Spinosi (Ensemble Matheus), Diego Fasolis (I Barocchisti) etc. She has performed in prestigious concert halls, including the Carnegie Hall, New York, the Opéra Garnier, Paris, the Vienna Konzerthaus and the Concertgebouw, Amsterdam. She has taken part in recording projects for Harmonia Mundi, MDG, Brilliant Classics, Arcana, Glossa, Ricercar, Erato, Naive. Her first solo album, Unwritten. Bach, Biber, Corelli, Marini. From Violin to Harp was released by the Arcana Outhere label. The recording received the highest praise from critics and was presented in international festivals around Europe.