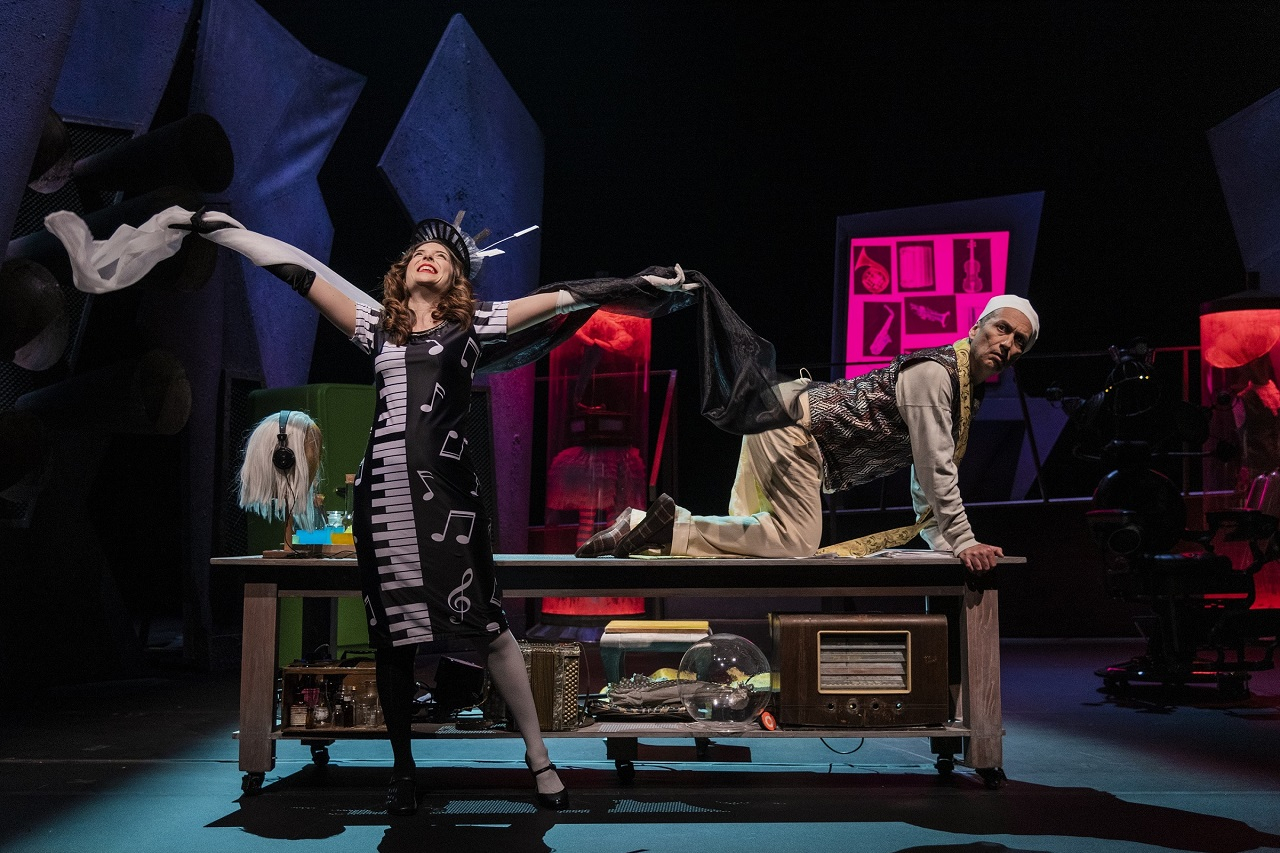 Libretto:
Thomas Moschopoulos
(in collaboration with the composer)

With the participation of a 5-member instrumental ensemble

Silence, the King Is Listening

Silence, the King Is Listening, Nikos Kypourgos’ and Thomas Moschopoulos’ “little musical”, one of the most popular works of contemporary Greek music theatre, arrives at the GNO Alternative Stage to captivate the public with its humour, poetic vein and subversive spirit.

Silence, the King Is Listening, an ideal introduction of younger as well as older spectators to the wonderful world of music, will be presented on the Alternative Stage of the GNO at the Stavros Niarchos Foundation Cultural Center from 19 December and for a run of 15 unique performances, and will later on tour to six cities in Greece.

The work is presented in a new, inventive staging by Theo Abazis – well-known for a series of productions that inseparably fuse the musical and theatrical element–, with an excellent cast of young, bright opera stars and a five-member instrumental ensemble. The subject, the amusing performances and the exceptionally direct musical writing directly communicate the key concepts of music even to the most uninitiated audiences, like a game.

Once upon a time…

The music king is never satisfied, no matter what pieces of music his court musician plays. The musician is roused from his despair by the Muse, who seizes the opportunity to return to a job she had not practised since the glorious eras of Schubert, Mozart and Bach. She enlists the help of the seven notes of the musical scale, inspiring the musician to write a wonderful piece – which once again fails to satisfy the king! It’s time, therefore, for the imagination to give (as always!) a solution… The Muse thinks of something new: She goes to the king disguised as a famous musician from abroad, whose music can supposedly be heard only by those who have a really good taste in music and knowledge of it. Understandably, neither the king nor his courtiers dare admit that the “masterpiece” presented to them by the Muse, in reality,  is nothing but a….

Inspired by Hans Christian Andersen’s fairy tale The Emperor’s New Clothes and (improbably!) dedicated to the memory of the American pioneering composer John Cage, Silence, the King Is Listening was written in 1993 and was first performed at the Athens Concert Hall – Megaron in 1994.  Hovering between operatic traditionalism and playful post-modernism, the work is at the same time, an ideal introduction of younger as well as (why not?) older spectators to the concepts, techniques and tools of musical composition, and also a hilarious, ruthless attack to all kinds of hypocritical snobbery that deaden musical creation and reception.

The work’s music is by distinguished composer Nikos Kypourgos. “In 1993 the newly-established Athens Concert Hall – Megaron commissioned George Kouroupos and me to compose, each one of us, a little musical. It was Thodoros Antoniou’s idea.  He would conduct them himself with the ALEA III Orchestra of Boston. But as Antoniou was in the States and I had no information from Megaron, I heard that I was going to write the work from the newspapers. First reaction: Stress. How would I make it in time? Could I avoid it by saying: “I can’t make it in time, you should have notified me earlier, how could you take it for granted that I would accept”? (This is how two out of the four persons commissioned reacted). Second reaction: “There’s an ideal chance to throw myself into work for a genre I have always dreamt of getting involved in! Third reaction: “Perhaps I can combine the first two with a satire of the so-called “serious” music, the seemingly serious contemporary music, the Megaron itself in the end, with references to the process of commissioning and inspiration, and with a lot of self-sarcastic undertones?” Fourth reaction: I returned to the second reaction.  I took a piece of paper and a pen (I still had no computer). The audience and the press reserved a very warm reception for the two new works, Kouroupos’ Little Red Riding Hood and mine. Those in charge also reacted enthusiastically and promised to repeat the successful evening that “only a few people managed to attend”. However, the works were not performed again. Fortunately, Antoniou recorded them in studio with his orchestra and a while later they were released in an album, which however passed almost unnoticed. The revival of Silence, the King Is Listening was made possible thanks to Kharálampos Goyós, who listened to the album 25 years later, transcribed it for five instruments and presented it at BIOS with the company “The Beggars’ Operas”.  I would like to note that Silence, the King Is Listening is not a work written for children. Only after its completion, some saw in it an educational character that makes it appropriate for children too.   Therefore,  in a way,  what I’ve always believed became apparent: that the boundaries between works for adults and works for children are never too clear or too discernible.”, notes Nikos Kypourgos.

Theo Abazis, an important creator who combines contemporary theatrical language with music in an inseparable blend, returns to the GNO Alternative Stage after the great success of the children’s performance Prince Ivan and the Firebird (October 201 – January 2018), stamping his mark on a fascinating production with plenty of humour, enticing melodies and impressive sets and costumes.

The music is by Nikos Kypourgos, the libretto by Thomas Moschopoulos in collaboration with the composer, the set and costumes by Kenny McLellan and the lighting design by Nikos Sotiropoulos.