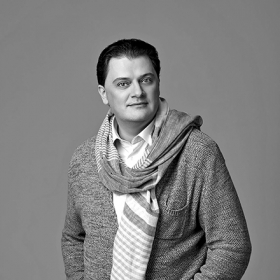 Latvian tenor, currently one of today’s most distinguished soloists in the world. Born in Riga, he studied singing with vocal teacher Margarita Gruzdeva, later at the Latvian Academy of Music. Has been awarded twice the Latvian Great Music Award (2004, 2021). Antoņenko made his debut at the Vienna State Opera with the role of Des Grieux in Puccini’s Manon Lescaut (2006), while in 2008 he debuted at the Salzburg Festival as Otello conducted by maestro Riccardo Muti. Later on, Antoņenko also sang this role brilliantly at the Metropolitan Opera in New York, the Opéra national de Paris, the Royal Opera House (Covent Garden, London), as well as at the Verbier Festival with leading soprano Anna Netrebko. He regularly performs on the world’s most famous opera theatres and festivals such as La Scala in Milan, Salzburg Festival, Bavarian State Opera, Vienna State Opera, Opéra national de Paris, as well as Semperoper Dresden, Zurich Opera House and elsewhere, singing a vast repertoire (among others, Verdi, Puccini, French and Russian tenor roles). This is the first time he performs at the Greek National Opera