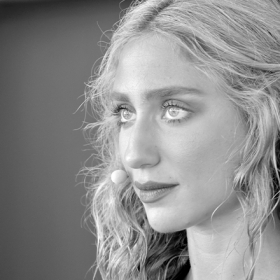 Born in Athens, she is an excellent graduate of the Athens Law School and works as a lawyer. She started music at a very young age taking piano and theory lessons and participating in children’s choruses, through which she collaborated with such composers as Mimis Plessas, Stamatis Spanoudakis, Dionysis Savvopoulos. Moreover, she participated in the dubbing of animated films. She has many personal discographic participations in the series of children’s songs Lahana and Hahana by Tassos Ioannidis. In 2018 she released the album Lahana and Hahana: Lullabies for 4 seasons together with Christos Thivaios, in which the singers George Dalaras, Giota Nega and Eleni Tsaligopoulou also participated. Since 2020 she has been a member of the female vocal ensemble chórεs, under the artistic direction of Marina Satti. As a chorister she has participated in the 1st Online Festival of the GNO Exit: Spring, as well as in Epitaph – Dionysos by Mikis Theodorakis and in Domna’s Song at the Alternative Stage of the Greek National Opera.