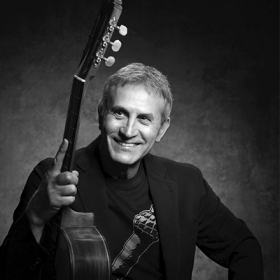 Greek singer, musician, composer, born in Piraeus. Since 1968 he has built important collaborations: Stavros Kougioumtzis, Manos Loizos, Apostolos Kaldaras, Lefteris Papadopoulos, Manos Eleftheriou were the first creators who trusted him with their songs, followed later on by Mikis Theodorakis, Manos Hadjidakis and more. He has also developed many international collaborations with artists such as Al Di Meola, Paco de Lucía, Sting, Ian Anderson, Goran Bregović, Emma Shapplin, Dulce Pontes, Eddy Napoli. Since 1981 he has travelled all over the world and has given more than a thousand concerts at the most prestigious venues, with world-class symphonic orchestras and great conductors. In 1983 at the Athens Olympic Stadium, 160,000 spectators attended his two concerts. In 1994 his collaboration with the Athens Concert Hall began. The performance “… kai me fos kai me thanaton akatapafstos” (“… incessantly, both with light and with death”) directed by Costa-Gavras was a journey through the history of Greek music. To this day he has recorded more than 80 personal albums and has participated in more than 110 as musician, singer or producer. His record sales exceed 15,000,000 and he has received numerous honorary awards.