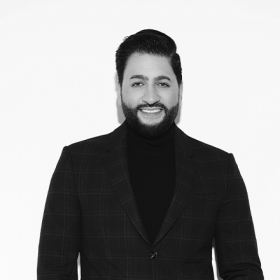 He has performed in numerous recordings for Deutsche Grammophon including a complete recording of Puccini’s Manon Lescaut live from the Salzburg Festival and a recording with his wife, soprano Anna Netrebko, on the cross-over album Romanza. On 9 March 2017, Yusif Eyvazov was awarded the title of “People’s Artist of Azerbaijan”.

During 2020/21 season he sang Don Carlo at the Bolshoi Theatre alongside Anna Netrebko and Ildar Abdrazakov, Manrico (Il trovatore) at the Gran Teatre del Liceu in Barcelona, Mario Cavaradossi (Tosca) at the Vienna State Opera and Teatro Real in Madrid, as well as Des Grieux (Manon Lescaut) at the Teatro Massimo in Palermo. Highlights of 2019/20 season include his triumphant return to the Metropolitan Opera for two of his signature roles: Herman (The Queen of Spades) and Calaf (Turandot), a performance which was broadcasted live in HD. Besides that, he also took part in the prestigious New Year Eve Gala concert for the Metropolitan Opera conducted by Yannick Nézet-Séguin and featuring a line-up of international stars. Moreover, he made his debut as Maurizio in a concert version of Adriana Lecouvreur at the Deutsche Oper Berlin and returned to the Vienna State Opera as Manrico (Il trovatore).