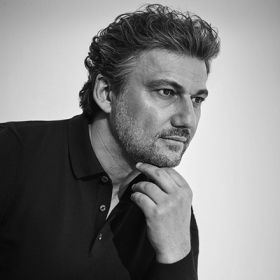 Bavarian tenor, he was born in Munich and studied singing at the Munich Academy of Music and Theatre. He began his career at the opera houses of Saarbrücken and Stuttgart and later he became a member of the Zurich Opera. Since his debut at the Metropolitan Opera, New York, in 2006 he sings major parts at the world’s leading opera houses, including La Scala in Milan, Opéra national de Paris, Vienna State Opera, Bavarian State Opera in Munich and the Royal Opera House (Covent Garden) in London. His exceptionally wide repertoire includes Italian, French and German opera as well as French, English and German Lied, oratorio and operetta.

His performances in London and New York and his highly acclaimed Puccini concert at La Scala have been presented in cinemas worldwide. In June 2017 he won great acclaim for his role debut in Verdi’s Otello at the Royal Opera House. In April 2018 he made his first step toward Wagner’s Tristan with concert performances of Αct ΙΙ at the Boston Symphony Hall and at the Carnegie Hall in New York. He sang the complete role for the first time in Munich last June under Kirill Petrenko.

Kaufmann’s versatility is documented on a number of CDs and DVDs in performances of such works as Pagliacci, Cavalleria rusticana, Don Carlo, La forza del destino, Aida, Otello, Tosca, Adriana Lecouvreur, Werther, Carmen, Lohengrin, Die Walküre, Parsifal, Königskinder and Ariadne auf Naxos. His solo albums are bestsellers. Moreover, the album Du bist die Welt für mich [You mean the world to me] with popular tunes of Franz Lehár, Imre Kálmán, Robert Stolz, Richard Tauber and others made it even into the pop charts.

Kaufmann has been selected several times as “Singer of the Year” by the classical music magazines Opernwelt, Diapason and Musical America as well as by the juries of Echo Klassik and the inaugural International Opera Awards (London). Kaufmann has also been acclaimed for his Lied recitals (Schumann, Schubert, Wagner, Mahler, Strauss, Liszt, Duparc, Britten, etc). His partnership with pianist Helmut Deutsch, with whom he worked as far back as his student days in Munich, has proven itself in countless recitals including one on 30 October 2011, on the stage of the Metropolitan Opera in New York. This was the first solo recital given at the MET since Luciano Pavarotti’s back in 1994.