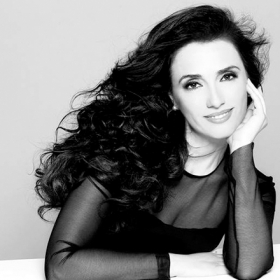 Soprano, born in Tirana, Albania, she has been acclaimed internationally as one of the finest singing actresses of our era in theatres including the Opéra national de Paris, Metropolitan Opera in New York, Royal Opera House (Covent Garden, London), Vienna State Opera, Bavarian State Opera in Munich, La Scala in Milan, Théâtre Royal de La Monnaie in Brussels, Gran Teatre del Liceu in Barcelona, Teatro Real in Madrid, and many others. Moreover, she has been especially identified with such roles as Violetta (La traviata), Desdemona (Otello), Cio-Cio-San, the title roles in Anna Bolena, Maria Stuarda and Suor Angelica, as well as Manon in both Massenet’s Manon and Puccini’s Manon Lescaut. Her performances of La traviata, Madama Butterfly and Suor Angelica at Covent Garden have been issued on DVD. She has received numerous awards and has recorded Puccini’s Le Villi, Leoncavallo’s Zazà and a recital disc for Opera Rara. Jaho makes her debut in Athens in one of her most celebrated portrayals, Cio-Cio-San in Madama Butterfly.