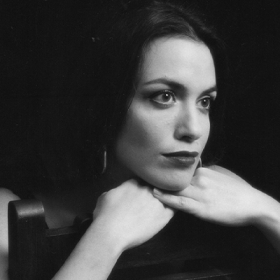 Greek mezzo-soprano, she studied piano, music theory and solo singing. In 2000 she debuted as a soloist at the Carnegie Hall, New York, at Mikis Theodorakis’ opera Electra. Since then she has excelled in an unusually extensive repertoire that includes Greek classical, art and folk music, opera, ethnic musics in concerts, performances and recordings in Greece and abroad. She has worked with most Greek cultural foundations (Greek National Opera, Megaron – The Athens Concert Hall, Thessaloniki Concert Hall, Athens Festival, etc), orchestras (Hellenic Broadcasting Corporation, Athens State Orchestra, Orchestra of Colours, etc), conductors and composers and has recorded, among others, for Mikis Theodorakis and Christos Leontis. The last years she has been participating in productions of the Alternative Stage of the Greek National Opera and teaches at the String Theory Choir. She has published two personal albums and has participated in thirteen other ones. The album Zorbas Ballet, Adagio Carnaval by Mikis Theodorakis (Decca) conducted by Charles Dutoit stands out (Best Classical Record Award 2004, New York Times).