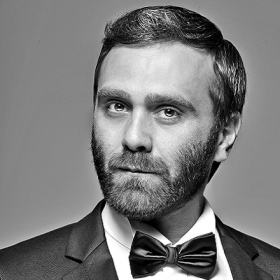 Greek bass-baritone, he took his diploma in singing from Athenaeum Conser- vatory under Dionyssis Troussas. He studied opera and acting at the Berlin University of Arts with Gabriele Schnaut and Robert Gambill (Alexander S. Onassis scholarship, State Scholarships Foundation of Greece). He continued postgraduate studies at the National Academy of St Cecilia (Rome) with Renata Scotto. He appears in major European venues such as Berlin State Opera, Rome Opera, Flanders Opera (Antwerp and Ghent), Arnold Schönberg Center (Vienna), at the festivals of Rieti (Italy) and Rheinsberg (Germany), in England, Ireland, Bulgaria, etc performing a particularly wide repertoire from Baroque to 21st century. He has cooperated as a soloist with the most prestigious Greek orchestras such as Armonia Atenea, National Symphony Orchestra of Hellenic Broadcasting Corporation at the Athens Concert Hall, Thessaloniki Concert Hall, Onassis Stegi, Odeon of Herodes Atticus, etc. Since 2000 he has been performing at the Greek Νational Οpera. He is the winner of two international singing competitions in Italy and Germany and speaks five languages. He studied at the Department of Theology (NKUA).