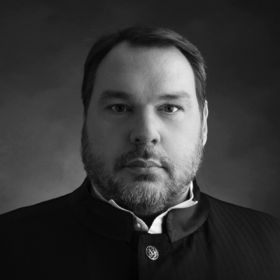 Greek bass, he has performed at the world’s most prestigious opera houses such as the MET (New York), Royal Opera House (Covent Garden, London), Teatro Real (Madrid), Grand Théâtre de Genève, Glyndebourne Festival, Bavarian State Opera, etc. The Maria Callas Scholarships, the late Christos Lambrakis and Kostas Paskalis, as well as the famous Greek bass Dimitri Kavrakos, with whom he still studies, played an important role in his musical and technical formation. He considers himself as an “artistic child” of the Greek National Opera, where he made his first important steps, and of the Megaron – The Athens Concert Hall, where he had the fortune to collaborate with leading artists. He has also worked several times with the Athens State Orchestra as well as with the National Symphony Orchestra and Chorus of Hellenic Broadcasting Corporation. He has given many personal recitals and religious music concerts. His repertoire surpasses a total of 90 works. He has recorded for EMI Classics, Bongiovanni, Rossini Opera Festival and LYRA.