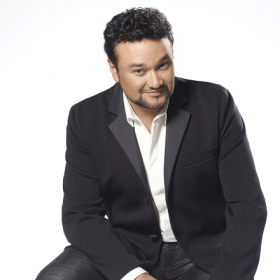 Born in Mexico, he is considered as one of the leading tenors of our time. After winning the Altamura / Caruso International Voice Competition in Milan, he completed his vocal studies at Vienna State Opera and in Italy with Rodolfo Celletti. He made his international debut in 1992 as Edgardo (Lucia di Lammermoor) at the New York Metropolitan Opera, while one year later he debuted as Fenton (Falstaff), at La Scala, Milan, under Riccardo Muti. He has been awarded numerous awards such as the Lauri Volpi Award as Best Opera Singer of the 1993 Italian season, Gino Tani Prize for the Arts (1995), Artist of the Year (Opera Now, 2000), ECHO Klassik – Singer of the Year Award (2001). His most recent successes include Alfred (Die Fledermaus, Vienna State Opera), Don Carlo (Los Angeles), Carlo (I masnadieri, Opéra de Monte-Carlo), Rodolfo (La bohème, Berlin State Opera) and Tito Vespasiano (La clemenza di Tito, Opéra national de Paris).