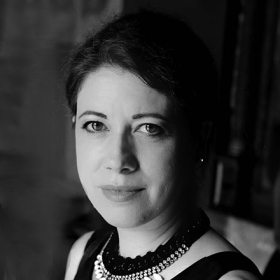 Greek soprano, she studied piano and advanced music theory at the Conservatory of Corfu, as well as classical singing at the Athenaeum Conservatory, Athens. She continued her studies (musicology, classical singing) at the Royal Holloway University (London), Birmingham Conservatory and the Vienna University of Music and Performing Arts. She has been a scholar of the Music Academy of Villecroze (France), the International Music Academy Maurice Ravel and the Bach International Academy, Stuttgart. She has given concerts in Europe, Asia and the USA performing opera, oratorio, Lieder as well as contemporary music. As a soloist she has collaborated with well-known ensembles and orchestras such as Melos Brass, Orchestra of Colours, Thessaloniki State Orchestra, Athens State Orchestra, Manhattan Philharmonic of New York, Armonia Atenea – The Friends of Music Orchestra, Symphony Orchestra of the City of Athens, National Symphony Orchestra of Hellenic Broadcasting Corporation, as well as the London Royal Philharmonic Orchestra. Moreover, she has collaborated with such conductors as Miltos Logiadis, Alkis Baltas, Peter Tiboris, Helmuth Rilling, Anthony Walker, Daniel Hoyem-Cavazza and Alessandro Ferrari.