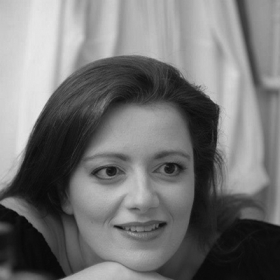 Greek mezzo-soprano, she was born in Athens. She studied piano, advanced music theory (diploma of fugue) and voice under Katy Papalexopoulou. She has performed as a soloist with the Greek National Opera in numerous productions of a wide range of repertoire, from Baroque to the 20th Century. She has been a permanent member of the Experimental Stage of the Greek National Opera since it was created. She was also a permanent member of the Hellenic Ensemble of Contemporary Music, performing Greek and foreign composers’ works, many of which were presented for the first time or were written especially for her. She has collaborated with the Athens Concert Hall, Αrmonia Atenea-The Friends of Music Orchestra, Orchestra of Colours, Symphony Orchestra of Hellenic Broadcasting Corporation, Ergon Ensemble, Cyprus State Orchestra, as well as with Delphi and Aix-en-Provence Festivals. She has performed in many cities in Greece and abroad (USA, Germany, France, Italy, England, Cyprus, etc.) in such concert halls as Carnegie Hall, Munich Academy of Arts, etc. She has recorded for Hellenic Broadcasting Corporation. She teaches singing at the Musical Horizons Conservatory in Athens.