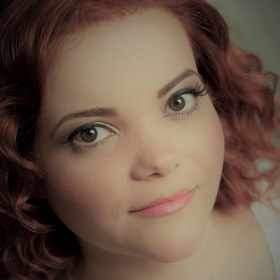 Greek soprano, she was born οn Paros island. She is a graduate topographic engineer. She attended monody classes under Christina Giannakopoulou (diploma with honors and first prize, 2011) and completed her postgraduate studies at the University for Music in Würzburg, Germany, under the guidance of Cheryl Studer. Since 2008 she has collaborated in a wide range of repertoire with The Beggars’ Operas, Greek National Opera, Mainfranken Theater Würzburg and Bavarian State Opera. Last year, she appeared as Cousin (Argyris Kounadis’ The gumcoffin) and Peep-Bo (Gilbert and Sullivan’s The Mikado) at the Alternative Stage of the Greek National Opera, as well as Anna (Nabucco) at the Odeon of Herodes Atticus. She has participated in concerts-tributes with works by great Greek and foreign composers in Greece and abroad. Moreover, she has sung Nikiforos Vrettakos’ poems on music by composer Panagiotis Konstantakopoulos. She is a scholar of the Richard Wagner Foundation (Würzburg).