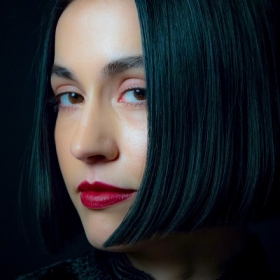 Greek mezzo-soprano, she was born in Athens. She graduated from the National Conservatory, Athens (Lydia Angelopoulou’s class, diploma with distinction and first prize) and attended lessons also with Olivera Miljaković and Marina Krilovici. In addition, she studied at the Royal Academy of Music, London (Jennifer Vyvyan scholarship, diploma with distinction) and at the Opera Studio of the Greek National Opera (2009/10). She has attended seminars of vocal technique, performance, Lied and pro-classical music with many teachers. She has performed Dido (Dido and Aeneas), Il Destino and Furia (Cavalli’s La Calisto), Sandmann (Humperdinck’s Hänsel und Gretel), as well as Armelinde (Viardot’s Cendrillon) and Alcina. At the GNO she has sung Annina (La traviata), Spirit (Sofianopoulos’ The Rime of the Ancient Mariner), Aricie (Milhaud’s La Délivrance de Thésée), Second boy (Die Zauberflöte), Myrsouda (Giorgos Koumendakis’ The murderess), Frantík (The Cunning Little Vixen), etc. She has given recitals in various cities in Greece. Moreover, she has cooperated with Armonia Atenea (Athens Festival), as well as with the Aegean Festival.