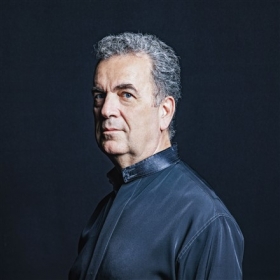 Βorn in Athens, he studied piano and advanced music theory at the Hellenic Conservatory, Athens, while he earned a diploma in conducting from the Hochschule für Musik, Berlin, under conductor Hans-Martin Rabenstein (1978/83). Since 1984 he has been collaborating with all Greek orchestras (Athens and Thessaloniki State Orchestras, Symphonic Orchestra of Hellenic Broadcasting Corporation, Armonia Atenea, etc), while he performs, among others, regularly at the Athens and Epidaurus Festival, Odeon of Herodes Atticus, Athens and Thessaloniki Concert Halls. He has conducted well-known orchestras in Germany, Austria, Turkey, Bulgaria, Italy, France, Israel, Hungary, Portugal, Russia, Uruguay and China. His repertoire includes the most important symphonic works and oratorios, as well as more than sixty operas. His work also includes numerous recordings of Greek composers, moreover he is recognized as one of the major exponents of the internationally acclaimed symphonic work of Mikis Theodorakis. He has recorded extensively for LEGEND, EMI and Hellenic Broadcasting Corporation. Since 1999 he has been Chief Conductor of the Greek National Opera Orchestra.