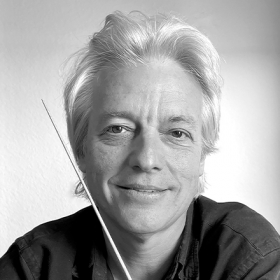 Presently in his twenty-fifth season as music director and conductor of the Fort Smith Symphony, in Western Arkansas, USA, John Jeter has received numerous awards. He is a featured conductor on Naxos with five successful recordings to date including a recent project with the ORF Vienna Radio Symphony Orchestra, Austria. He has conducted numerous orchestras (Indianapolis Symphony, Charleston Symphony, Wichita Symphony, Arkansas Symphony, Oklahoma City Philharmonic) and film music programmes. Dedicated to education he has created a number of award-winning programmes for young people as well as projects related to music and health (Mercy Hospital, Fort Smith and the Providence Health Network, California). Through hard work and dedication, the Fort Smith Symphony was one of a very small number of orchestras in the United States that presented its entire subscription season live to audiences during the 2020/21 pandemic. Jeter has degrees in music from the Hartt School of Music and Jordan College of the Arts. His other interests include graphic arts, American history and vintage aviation.