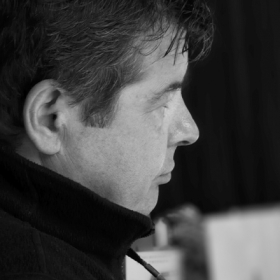 After completing his film studies at the Stavrakos Hellenic Cinema and Television School in Athens as well as at the University Technical College Leeds (UK), he worked foremost as a steadicam and camera operator for such film productions as Ulysses’ Gaze (Grand Jury Prize / FIPRESCI Αward, Cannes 1995) and The Bachelor (Golden Leopard Nomination, Locarno 1997). He apprenticed to Academy Award winning directors of photography such as Roger Deakins and Walter Lassally. We worked as a director of photog- raphy for many films that have been awarded in festivals worldwide, among them The Four Seasons of the Law (Caligari Film Award / CICAE Award / Don Quixote Award / 50th Berlinale). Among others, he has received the Best Cinematography award at the 30th Drama International Short Film Festival for the movie Gina Dostoyevsky. He has worked for a number of prominent theatre, dance and opera productions.