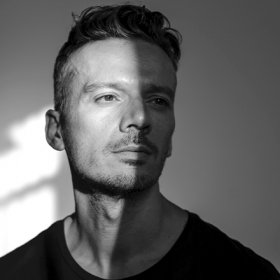 Actor and director, he was born and lives in Athens. He graduated from the Drama School of the Athens Conservatoire and from the Department of Theatrical Studies (Faculty of Philosophy, NKUA). Moreover, he attended a summer course on digital cinema at the New York Film Academy. Since 2000 he has been working as an actor in theatre. He was nominated for the Best Actor award in Spain (Mostra Valencia) for his performance in the multi-award winning film True Blue by Yannis Diamandopoulos. He represented Greece at the 30th Fadjr, International Theatre Festival in Tehran, Iran, creating the seminar “Body and shadow”, exclusively for Iranian performers. Since 2008 he has worked as a theatre director. In collaboration with some of the most prestigious Greek artists, he has directed, among others, at the Athens Festival, SNFCC, Megaron – The Athens Concert Hall, Michael Cacoyannis Foundation, Foundation of the Hellenic World, Theseion Theatre, Vasilakou Theatre, Veaki Theatre and National Theatre of Greece. Katerina, the play he directed after adapting Auguste Corteau’s same title book, won six awards. Despo is his first production for the Greek National Opera.