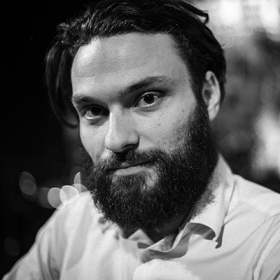 Music producer, composer, sound designer and technician, he has worked in leading productions of Greek discography, theatre and contemporary dance. His work has been presented at the Tchaikovsky Conservatory in Moscow, Göteborg Opera, Athens and Epidaurus Festival, Greek National Opera, Onassis Stegi, Michael Cacoyannis Foundation, Attica School of Ancient Drama, National Theatre of Northern Greece, etc. He collaborates permanently as a composer, sound designer and technician with the inter- national dance groups RootlessRoot and Jukstapoz, as well as with several international choreographers. He has worked as a FOH sound engineer and sound designer in concerts and prestigious theatres in different countries worldwide. As an artist he first appeared through the interactive audiovisual installation “Synaesthesia – Solomon’s case” in 2016 (Michael Cacoyannis Foundation). Moreover, he was invited by the International Association of Synaesthetes, Artists and Scientists (IASAS) to participate in the 2nd World Synaesthesia conference in Moscow (2019), where he presented his work at the Tchaikovsky Conservatory, the Moscow Museum, and the State University of Psychology and Education.