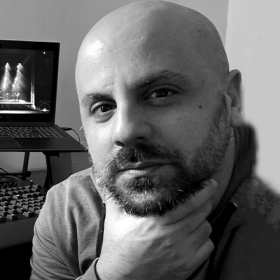 Born in Athens, he has been studying the light since the age of 18. He has been lighting designer for dozens of theatrical and music performances at numerous venues throughout Greece (National Theatre, Greek National Opera, Ancient Theatre of Epidaurus, Odeon of Herodes Atticus, etc), as well as for many European productions. In addition, he has designed the lighting for some of the largest music productions in Greece. Among others, he has collaborated –and still collaborates– with such popular Greek singers as Haris Alexiou, Marinella, Antonis Remos, Tania Tsanaklidou, Dionyssis Savvopoulos, Natassa Bofiliou, Eleni Vitali, but also such artists as Simos Kakalas, Martha Frintzila, RootlessRoot and many others. He teaches the art of lighting in private schools and seminars. He also works as a director of photography and director of music and theatrical multi-camera productions, video clips and short films.