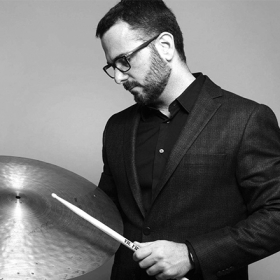 He holds a Master’s degree from the Department of Music Studies of the Ionian University, he has studied at the Philippos Nakas Conservatory and is a graduate of the Department of Physical Education (NKUA). He has participated in the International Association of Jazz Schools at Berklee College of Music. He has studied composition at the Music Interval Theory Academy with Frank Herringer and Thomas Chase Jones. He composes music for theatre, dance and choral ensembles, while he has also presented two of his own works. He makes arrangements for artists of the Greek music scene, while as a drummer he has collaborated with many jazz, latin-jazz, funk and fusion-jazz artists from all over the world. He edits and presents the music performances-concerts “Light House Sessions” (SNFCC), as well as the show “Music Dialogues” (Hellenic Parliament Television). He has taught at the Department of Music Studies of the Ionian University and at the Philippos Nakas Conservatory. He is director of studies at the LAB | Music Education of Athens, while he also teaches drums. He is co-owner and director of the LAB | Music Education of Heraklion, Crete.