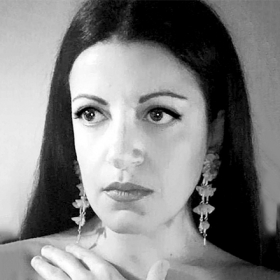 Born in Kalamata, she studied mathematics at the University of Athens and costume design for performances at Central Saint Martins – University of The Arts London. Moreover, she studied set and costume design at the National Theatre of Greece, in the costume construction and implementa- tion department of which she also completed her internship. She has been working as a costume designer in the theatre and dance since 2016. As an assistant costume designer she has worked for the National Theatre of Greece, Greek National Opera, Athens and Epidaurus Festival, Spyros A. Evangelatos Amphitheatre, Municipal Theatre of Piraeus, Pallas Theatre, etc. As a costume designer she has worked at Skrow Theatre, Alfa Theatre, Station Theatre, Metaxourgio Theatre, Regional and Municipal Theatres of Kozani and Ioannina, Greek National Opera. She has participated in per- formances of such directors as Katerina Evangelatos, Lilly Meleme, Vassilis Mavrogeorgiou, Nikorestis Haniotakis, Konstantinos Markoulakis, Costas Filippoglou, Nikaiti Kontouri, Manos Karatzogiannis, Lefteris Plaskovitis, Patricia Apergi and many other theatre groups.