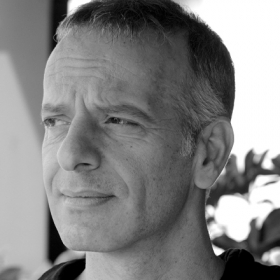 He was born in Toronto, Canada. In 1993 he began his studies at the Stavrakos Hellenic Cinema and Television School in Athens (Department of Scenogra- phy-Costume Design). Since then he has curated sets and lighting for theatre as well as for dance performances at international festivals and companies in Greece and abroad. His sets have been presented at the Onassis Stegi, Athens Festival, Foundation of the Hellenic World, Michael Cacoyannis Foundation, Grec Festival and Mercat de la Flors (Barcelona), The Place (London), Seoul Arts Center, Göteborg Opera, etc. For many years he has been working for film productions (feature and short films, documentaries), TV series, shows and advertisement, supervising the arrangement of inte- rior spaces, as well as the creation of specialised set constructions for the needs of films. He also supervises the arrangement of interiors, mainly of music scenes and has participated in group exhibitions, creating furniture, lighting and useful design objects. Since 2008 he has been organising the Arc for Dance Festival.