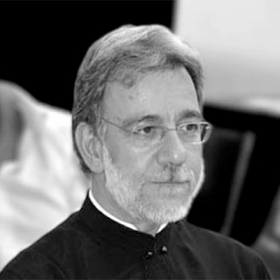 He was born in Athens. He obtained a diploma in piano from the Hellenic Conser- vatory and studied orchestral conducting at the Berlin University of Fine Arts. He has conducted numerous ensembles in Greece and abroad. As part of the Athens Festival he conducted both concerts of Jean-Michel Jarre at the Odeon of Herodes Atticus (2001). He has been collaborating with the Greek National Opera since 1984, as a pianist for the music preparation of the soloists and as a conductor for opera and ballet productions. He has conducted such operas as Anna Bolena, Nabucco, La traviata, Macbeth, Il trovatore, L’elisir d’amore, Die Entführung aus dem Serail, Die lustige Witwe, Il barbiere di Siviglia, La finta giardiniera. Moreover, at the Acropol Theatre he regularly conducted operetta productions staged by the GNO such as The Godson, The Apaches of Athens, Il fiore di Levante, The Love Bacillus, The Neighbourhood Girl. He graduated from the School of Theology (Aristotle University of Thessaloniki), while in 2008 he was ordained priest.