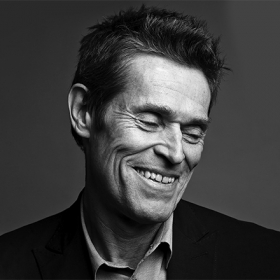 Famous American actor, multi-award winning, with Oscar nominations and riveting performances, he was born in Appleton, USA. From a young age he wanted to become an actor and was a founding member of the experimental theatre company The Wooster Group. He has starred in cinema in a variety of different roles as Jesus, Japanese god of death, prisoner of Auschwitz, vampire, priest, soldier, spy, etc in such famous films as Platoon, Off Limits, Streets of Fire, To Live and Die in L.A., Born on the Fourth of July, The English Patient, The Last Temptation of Christ, Mississippi Burning, Spider-Man, The Dust of Time by Theo Angelopoulos, The Grand Budapest Hotel, while he has lent his voice to the films Fantastic Mr. Fox and Finding Nemo. He co-starred with Marina Abramović at the Manchester International Film Festival in 2011 in the premiere of The Life and Death of Marina Abramović.