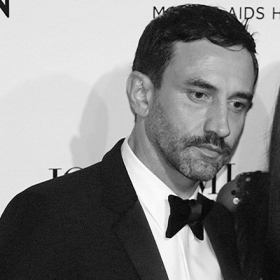 Italian fashion designer, he studied in Italy and London. Prior to launching his own label in 2004, Tisci worked for Puma, Antonio Berardi and Ruffo Research. In 2005, Tisci was named creative director for Givenchy ready- to-wear, haute couture and accessories, later taking over the menswear division in 2008. Following over a decade of experience and success at the creative helm of Givenchy, Tisci transitioned as a chief creative director to Burberry. He has dressed such artists as Madonna, Rihanna (Diamonds World Tour, 2013), Beyoncé and Jay-Z on their On the Run Tour (2014). Moreover, he collaborated with Nike on three capsule collections of shoes and sportswear apparel, he has curated leading magazines and CD covers for artists such as Kanye West and Jay-Z, as well as for the GOOD Music label. He designed his first ballet costumes in Marina Abramović’s Boléro (chor. Sidi Larbi Cherkaoui and Damien Jalet) for the Opéra Garnier, Paris.