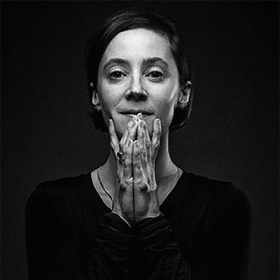 Performer, choreographer and director, she has presented solo performance works at the Fondation Beyeler in Basel, SESC Pompéia and Paço das Artes in São Paulo, Robert Wilson’s 2nd Annual Berlin Benefit, International Festival of Fashion, Photography and Fashion accessories at Hyères and at Kunstfest Weimar. She has been assistant director on Zinnias: The Life of Clementine Hunter and The Old Woman, both directed by Robert Wil- son. Moreover, she has been a close collaborator of Marina Abramović. She co-directed A Different Way of Hearing: The Abramović Method for Music by Marina Abramović (Alte Oper, Frankfurt, 2019), she collaborated with Marina Abramović on The Cleaner in Stockholm, a retrospective of the artist’s work and a collective performance that lasted seven days (2017) and she performed with Marina Abramović at the Serpentine Gallery in Lon- don for the show 512 Hours (2014). She has cast and trained performers for Abramović worldwide. She directs and co-authors the public participatory work The Abramović Method.