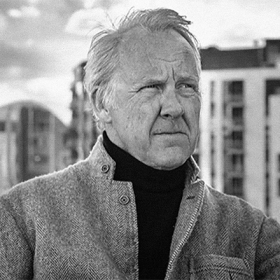 Born in Oslo, he studied social economics in London. He worked as a direc- tor at the Norwegian National Theatre before embarking on a career as a screenwriter and producer for film and television. Based in Oslo, but working from Los Angeles, he has written and executively produced many films, including Kon-Tiki, which was nominated for an Oscar and a Golden Globe in 2013, the WW2 epic The 12th Man (2017), Brian De Palma’s thriller Domino (2019) and the upcoming The Execution, about the murder of Jamal Khashoggi. For twenty years he has also been the writer of the annual Nobel Peace Prize concert in Oslo. He has a long history of collaborations with Marina Abramović.