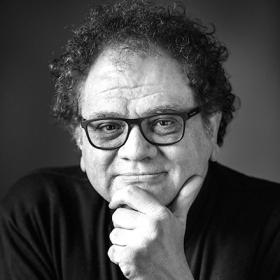 Born in Rimini, Italy, in 1986 he founded Ideogamma, now a leading company in virtual scenery and visual design in the world of theatre, opera and performing arts. His passion finds ongoing motivation and gratification, not only through his pursuit of technically impeccable results, but also thanks to the satisfaction of the professionals, with whom he works on a regular basis, directors, scenographers and choreographers such as Sun Daqing, Hugo de Ana, Gilbert Deflo, Giancarlo del Monaco, Ezio Frigerio, Li Hanzhong, Yannis Kokkos, William Orlandi, Lluis Pasqual, Pier’Alli, José Carlos Plaza, Zuo Qing, Gianni Quaranta, Peter Stein, Tingxiao Huo, Vladimir Vasiliev and Chen Xinyi. In over thirty years of successful career Sergio Metalli realized more over than 400 productions and has worked with major opera theatres throughout the world. For the Greek National Opera he has designed the projections for the operas Tosca (2012 & 2015), Madama Butterfly (2013 & 2017) and Elektra (2017).