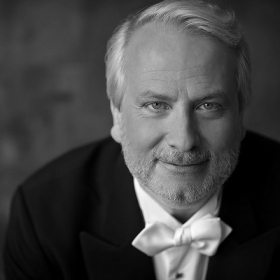 Born in Nice, France, he is considered among the most sought-after conductors worldwide. He studied conducting in Vienna and Florence and has been assistant conductor to Herbert von Karajan and Sir Georg Solti. From 2010 to 2018 he was music director of the Washington National Opera. Auguin has led an extraordinary career conducting the most prestigious orchestras in a vast operatic and symphonic repertoire in the world’s major opera houses and festivals such as the Metropolitan Opera (New York), Vienna State Opera, La Scala (Milan), Royal Opera House (Covent Garden, London), Salzburg Festival, etc. He was made an Honorary Consul of the French Republic (2002) and for his contribution to German culture he was awarded the Cross of the Order of Merit of the Federal Republic of Germany (2005). He has conducted Tannhäuser (2009), Nabucco (2018) and La sonnambula (2019) at the Greek National Opera, where this artistic season is an “Artist in Residence”.