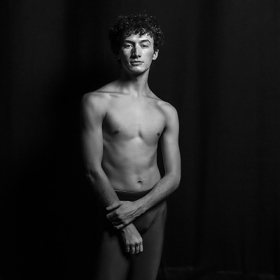 He was born in Louisville, Colorado. He started his training at the Boulder Ballet School and later he attended The School of American Ballet in New York City. He began his professional career at the Semperoper Ballett in Dresden and later danced with the Leipzig Ballet. Ιn both companies, he performed roles in works such as The Nutcracker and Swan Lake. During the 2020/21 season, he became a member of the Corps de ballet of the Greek National Opera.