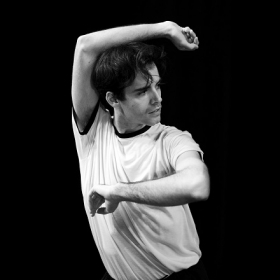 He was born in Albacete, Spain, where he started dance studies in 2012. One year later he moved to Madrid, where he graduated from the Royal Professional Dance Conservatory “Mariemma” in 2017. He joined the Sibiu Ballet Theatre (Romania), where he danced Soloist and Corps-de-ballet roles, including Pas d’action (La Bayadère), Spanish dance, Danse des Mirlitons, Harlequin and Soldier dolls (The Nutcracker) and Pas-de-paysant (Giselle). He also danced neoclassical and contemporary works as Parlez-moi d’amour, choreographed by the former dancer of the Paris Opera, Martin Chaix. In September 2019, he joined the Greek National Opera Ballet, dancing in such productions as Swan Lake (choreography Konstantinos Rigos / Neapolitan dance). Since 2017, he ventured into choreography, with works as Al tormento or In behalf of joy for Sibiu Ballet Theatre and Quererte como te quiero for the 28th International Ballet Competition in Varna, Bulgaria.