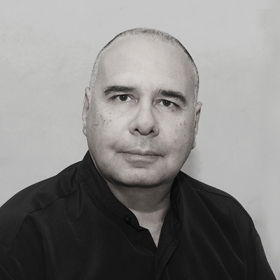 Born in Athens, he began his piano training at the National Conservatory at a young age. Later he pursued studies in Mechanical Engineering at the Technological Educational Institute of Larissa, while at the same time he began taking lessons in jazz guitar with Takis Barberis, jazz theory with Vassilis Rakopoulos and classical singing with Takis Troussas, receiving his diploma in solo singing with honours and first prize. He collaborated with the Greek National Opera as an additional chorus member in Der fliegende Holländer (1995) and Turandot (Odeon of Herodes Atticus, Athens Festival, 1996). Since 1997, he has been a regular member of the Greek National Opera Chorus, participating in almost all productions. Moreover, he has also sung such roles as Pinellino (Gianni Schicchi), Courtier (Rigoletto), Servant / Messenger (La traviata), etc.