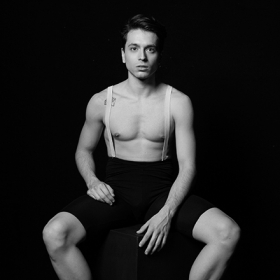 He started ballet at the Dansepartout Dance School (Rome) at the age of ten. In 2009 he won the Anita Bucchi award of the Rome National Theatre and a scholarship from the Royal Ballet School (London). He studied at the John Neumeier Dance School (Hamburg) and later at the Palucca University of Dance (Dresden). He has been a member of the National Moravian-Silesian Ballet (Czech Republic), dancing classical and modern repertoire, while later he became a Soloist. In 2016 he was candidate for the Thalia award (category: Best Male Dancer) for his performance in the role of Puck (A Midsummer Night’s Dream) directed and choreographed by Youri Vámos. In 2017 he danced at the Arena di Verona with the Dansepartout Ensemble in such performances as Giselle, The Nutcracker, Swan Lake and in Carla Fracci’s projects. From 2018 he has been a member of the Greek National Opera Ballet.