In line with the restrictive measures for the protection of public health against the spread of the coronavirus (COVID-19) announced by the Greek Government, the Greek National Opera’s Stavros Niarchos Hall will operate at 30% maximum capacity, namely, with 96 seats out of a total of 322. Moreover, it is noted that according to the instructions of the Greek State, tickets will only be purchased online or by telephone, the use of mask will be obligatory when entering and exiting the building and throughout the performances, on either side of each seat (single or double) there will be at least two empty seats left, overcrowding shall be avoided, and the prescribed physical distance between viewers and between the audience and the stage / orchestra shall be maintained, while special protocols are in place for the cleaning, disinfection, air-conditioning and ventilation system of all areas of the GNO at the SNFCC.

Antonio Vivaldi’s Four Seasons, a timeless masterpiece, an hymn to the natural cycle and the circularity of time, comes for a second year through an original “green” performance to the GNO’s Alternative Stage. Following last year’s success, the Four Seasons, one of the most popular pieces of baroque music, is brought to life on stage in a unique way through a music theatre performance touching major issues related to our attitude toward the environment and the dangers threatening it. Subjects such as the reduction in the use of plastics, food waste and circular economy are presented to children in a playful and entertaining way, while developing their ecological awareness and artistic education.

The idea of recycling lies at the heart of this particular project’s concept which is targeted at children aged 6 to 96. Disposable goods, from plastic bags and bottles to plastic straws and gloves, are transformed into impressive costumes. The work is staged by the subversive theatre group Patari Project, under the guidance of talented Sophia Paschou, - a company whose performances have become a point of reference over the last years in the field of theatre for children and young audiences. Vivaldi’s original material was processed and developed by composer Nikos Galenianos, an artist with a significant presence in Greece and abroad, into a new orchestration which will be combined with original instrumental and vocal interventions. The performance Four Seasons is a creative synergy between the Greek National Opera and Lidl Hellas and one more step in a collaboration that has already begun in 2008, when Lidl Hellas emerged as a sponsor of educational workshops of music, music theatre and artistic creation.

The performance is realized thanks to the support of the grant from the Stavros Niarchos Foundation to the Greek National Opera.

Vivaldi’s Four Seasons in the era of recycling

Inspired by the beauty of Mantua’s natural landscape in Northern Italy, Antonio Vivaldi composed approximately three hundred years ago Four Seasons, perhaps the most famous work in the classical music repertory. Four concertos for violin, in which the composer transforms the four seasons into notes. A highly popular work, Four Seasons is an hymn to the alternation of seasons and the way they influence man and nature.

Likewise, in the Patari Project’s performance Four Seasons, the passing of each season moulds the story in a different way and leaves its own imprint on the passing of time itself. Spring, summer, autumn, winter… seasons succeed one another recycling whatever it is that marks them. People welcome them but they’re never the same.

Since 2012, the year the Patari Project was introduced to the audience, it has always “played” with the concept of risk. It chooses to work with the platform technique which in itself carries the challenge of accomplishing every single time something that at first seems impossible: to be able to tell a story on a small attic, a limited stage, a so-called “platform”, where actors can barely fit and where they are called upon every time to find a way to create with their bodies and voices images, rhythms, landscapes, characters, scenarios, entire worlds.

Similarly, in the GNO Alternative Stage’s performance Four Seasons, the Patari Project mount the four seasons on the attic, in a plain, circular setting symbolizing the world. Will they fit in there together with the performers and the musicians? How much can they change in every spin? The music begins and the seasons start going by, taking children and adults away on a magical journey full of humorous and unexpected happenings, overturns and surprises.

Composer Nikos Galenianos notes about the new orchestration: “No need for introduction of the Four Seasons. We meet them again here, in a bold orchestration with just five musical instruments, in search of a new chemistry. The sounds of a small baroque ensemble and an accordion not only intend to cover the original music lines, but also to renegotiate the overall sensation caused by the work, based on the particular traits of this new mix. The seasons, sometimes deconstructed, along with the original instrumental and vocal music interventions do not just co-exist with the performance; they are an indispensable part of it, they are the breath itself that allows the actors-seasons to continue to exist”.

Experienced Sophia Paschou offers an inspired and imaginative direction of the Four Seasons, while marking her stamp upon a thrilling music theatre performance, which does not only entertain, but also raises awareness on environmental issues. As she notes: “Starting from the ceaseless life-cycle and environmental destruction, we created a performance related to people’s incessant need to try to impose themselves on nature, change the order of things, and be the ones who define the rules. Music, placed at the starting point of everything, gives birth to the heartbeat. Besides, everything is rhythm and movement. Each note is a breath of air. We placed music at the centre of the circle, and around it the seasons in their natural course. Experimenting, everything ended up to a game. The game brought winning and winning the need for someone to look better or more powerful. By building this game, we touched the point where man finds himself weak against himself and his ego. We saw how easy it is to give orders, to insult, to arbitrarily change the rules, to impose our own desires. It is difficult to talk about concepts like the planet and its destruction, it would be easy to become didactic and hard to be meaningful. We invented characters who experience everything in their exaggeration, an enlarged frame of human nature. Through this scheme of exaggeration and incessant movement and flow of pictures and sounds emerges a multilevel establishment, with which everyone is free to identify in any way they want”. 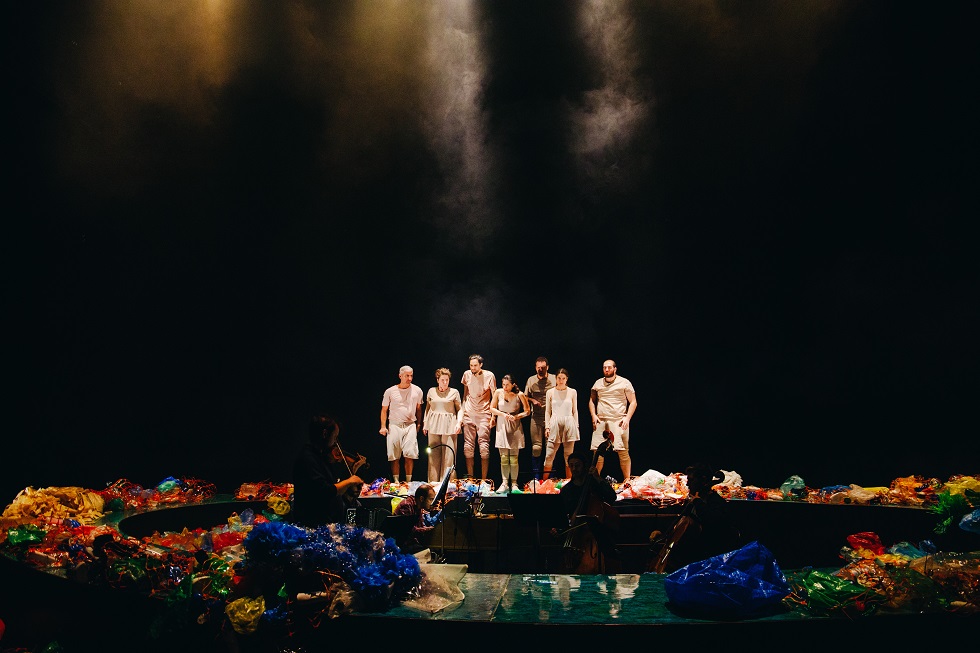 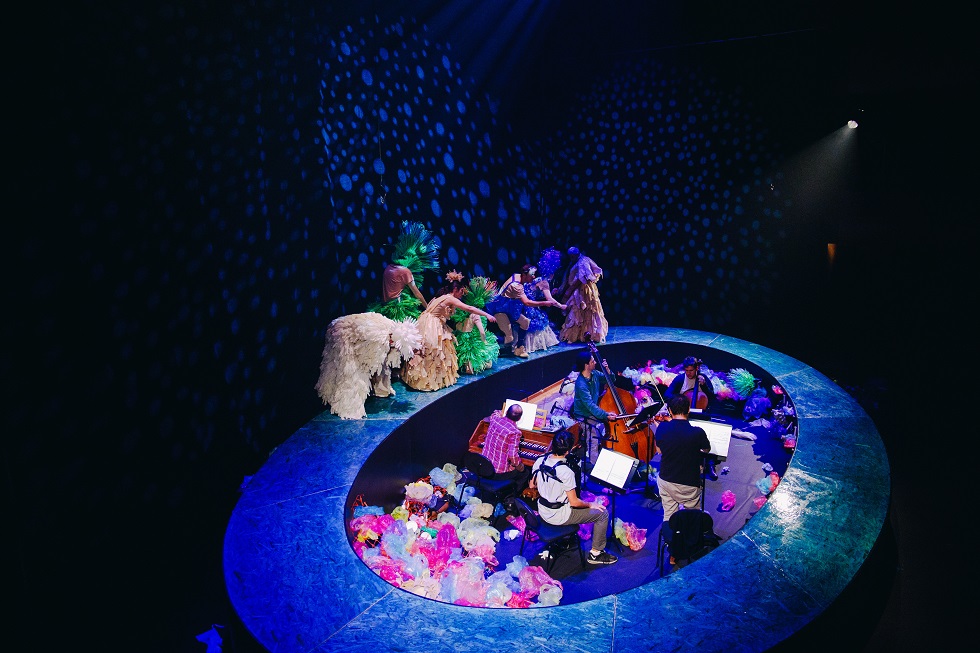 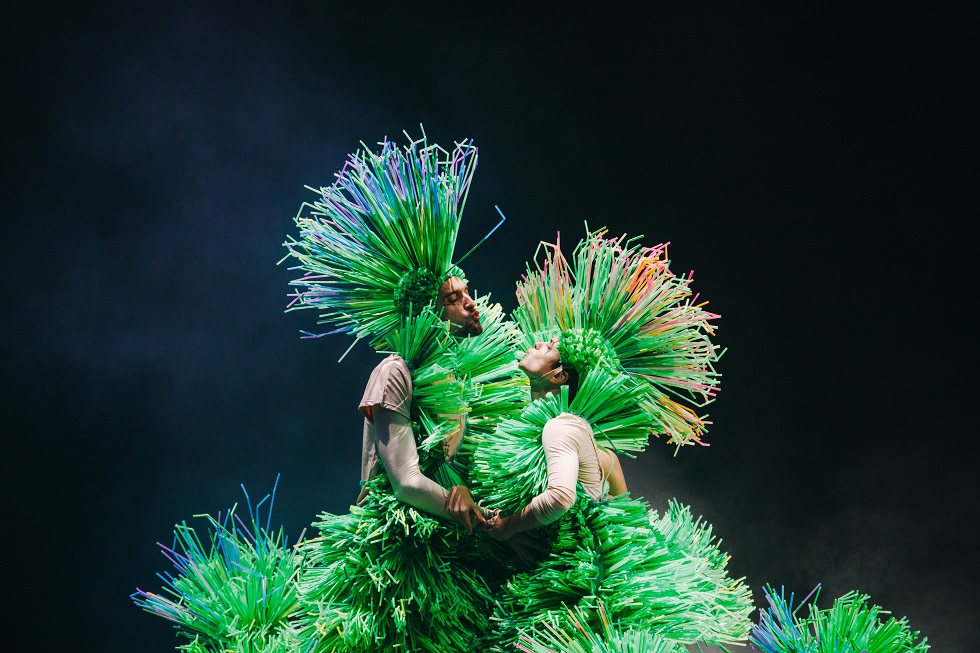 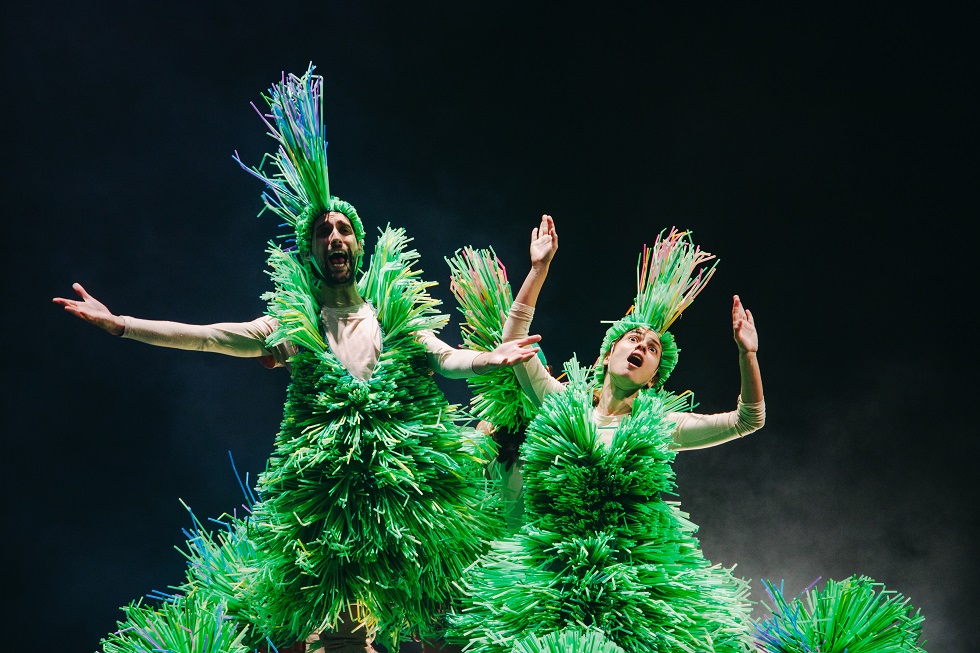 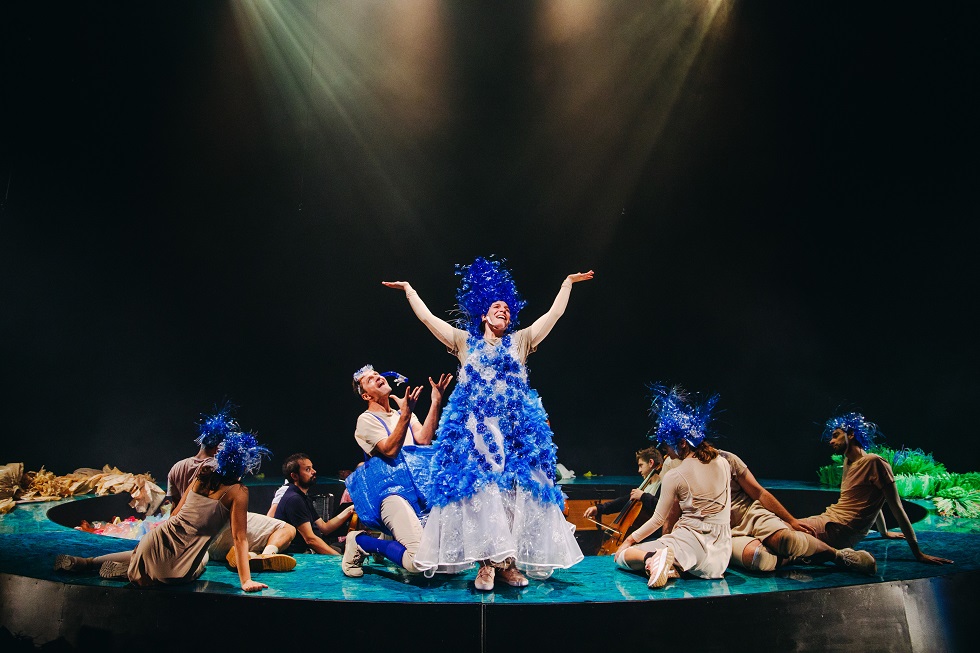 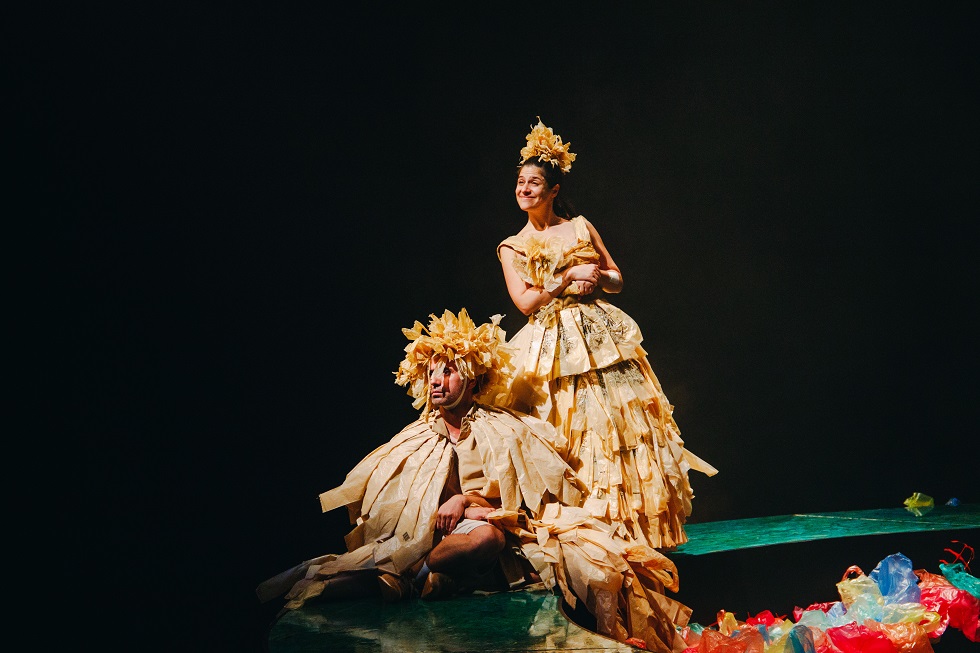 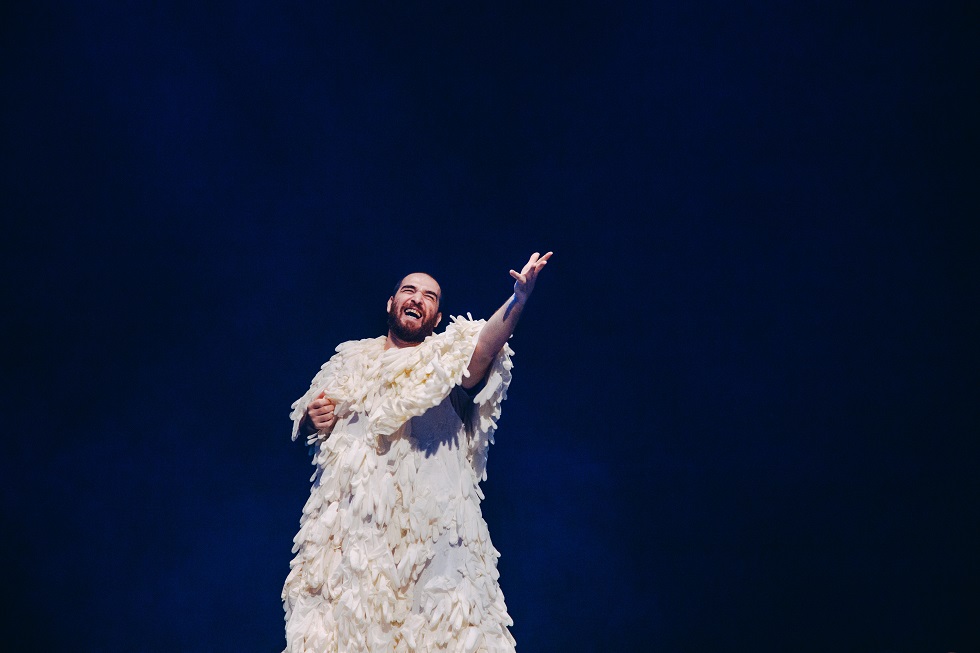 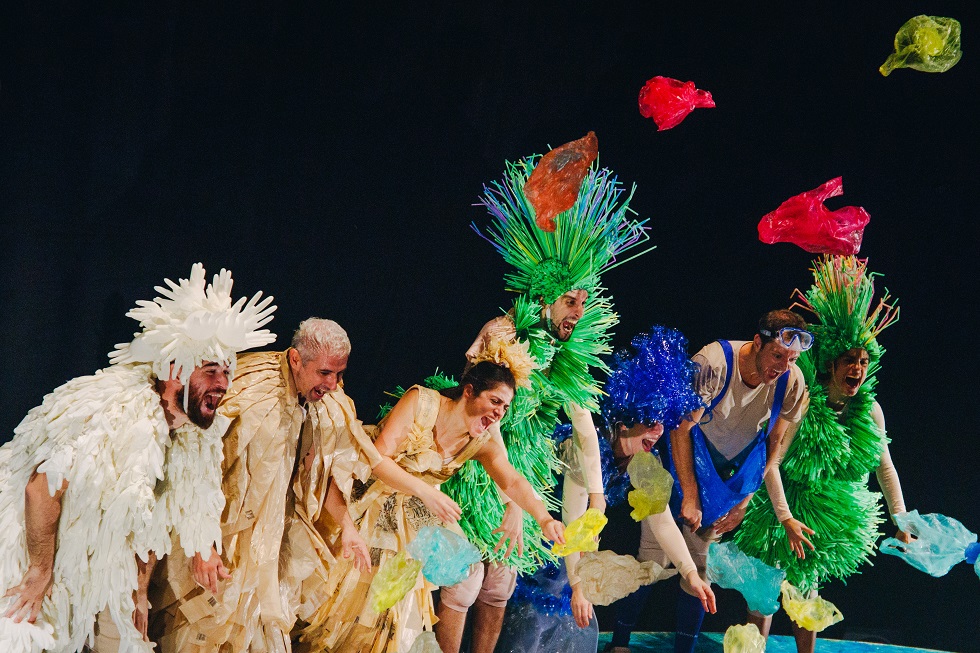 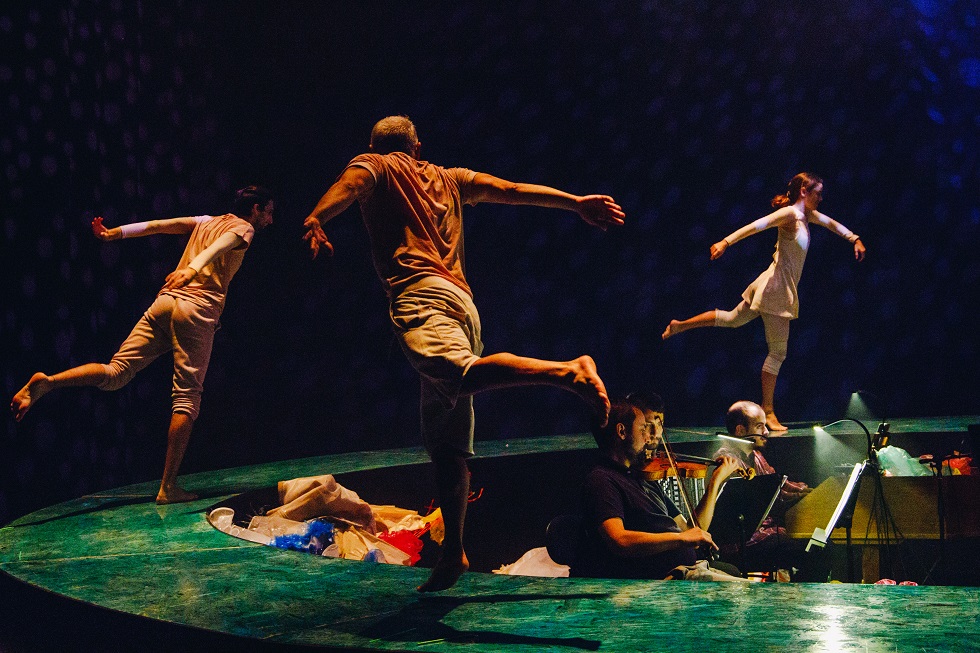 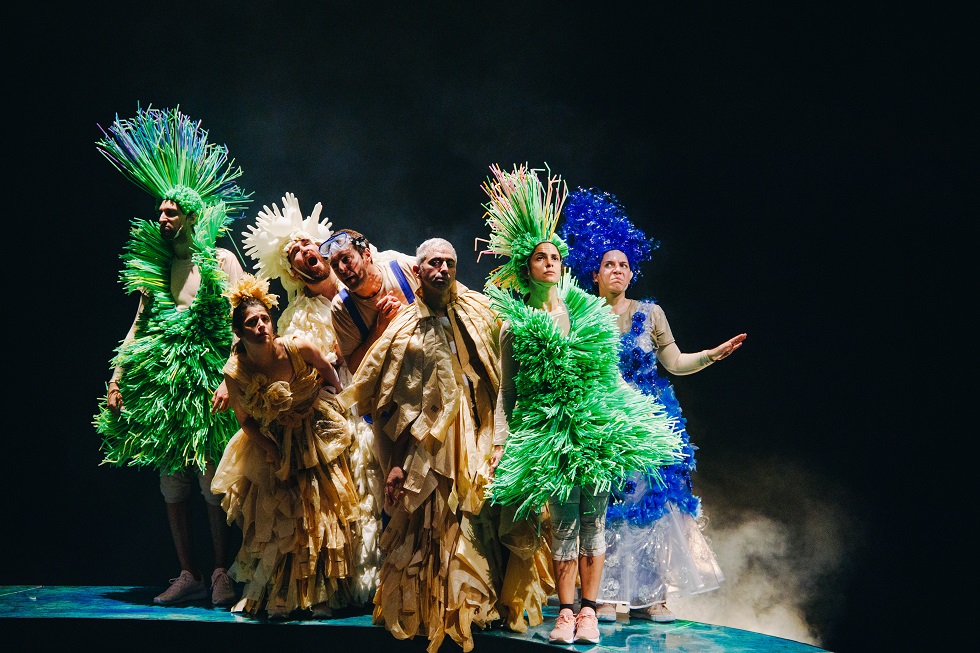